About the Dracula Society

Do you feel an affinity with the supernatural in literature?

Is your spiritual home a cobwebby, half-ruined castle somewhere in eastern Europe?

Do you curl up at night with a collection of vampire stories, or a volume by Poe, or Le Fanu?

If you do, then why not join The Dracula Society?

The Society was founded in October 1973 by two London-based actors, Bernard Davies and Bruce Wightman.

We cater for lovers of "the vampire and his kind" - werewolves, reanimated mummies, mad scientists and their creations, and all the other monsters spawned by the Gothic genre.

The Society was originally founded specifically to enable its members to travel to regions such as Transylvania, which had scarcely been touched by western tourism at the time of the Society's formation.

Now nearly fifty years on, the Society's main emphasis is on its London-based meetings, which include guest speakers, discussions, quizzes, film and video screenings, and auctions.

We also still regularly organise group trips to places with Gothic and/or supernatural associations, both in the United Kingdom and elsewhere.

Since it is named after one of the most evocative titles in the whole genre, one of the most enduring and influential of Gothic novels, the Dracula Society naturally devotes a good deal of its attention to Dracula, the novel, and its author, Bram Stoker. However, the Society's field of interest embraces the entire Gothic literary genre, and incorporates, too, all stage and screen adaptations, and the sources of their inspiration in myth and folklore.

Please note that the Society is not concerned with psychic research or occult ceremony of any kind. 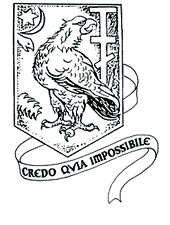 The Society's motto illustrates our broad approach. It comes from the writings of Tertullian, and translates loosely from the Latin as "I believe because it is impossible".

It expresses our spirit of open-minded enquiry. The elements of the insignia are very loosely based on the coat of arms of the Voivodes of Wallachia, who included in their number the real historical Vlad Dracula, from whom Bram Stoker derived the name of his fictional vampire Count.

The Society maintains a small Dracula/Gothic-related archive to preserve materials associated with these themes. It includes the complete papers of actor-manager Hamilton Deane, who first made Count Dracula famous on the stage, and a cloak once worn by Sir Christopher Lee in his screen portrayal of the role.

At the beginning of every year, the Society invites its membership to nominate potential recipients for its two annual awards.

The Hamilton Deane Award is given to the person or persons who are judged to have made the most outstanding contribution to the Gothic/supernatural genre in the performing arts.

The Children of the Night Award - its literary counterpart - is awarded to the author of the fiction work judged to be the most outstanding in the field.

These two awards are presented at our Annual Dinner, held in London at the beginning of November to honour the birthday of Bram Stoker.

The Society also presents an occasional special third award, which was inaugurated in 2012, The Bernard Davies Award.

Named in honour of the memory of one of our Society founders, it specifically recognises achievement in the area of scholarship in the Gothic genre, and is presented by the Society Committee.

In 2012 its first recipient was Dr. Elizabeth Miller of the Memorial University of Newfoundland in Canada, who is one of the world's foremost researchers and authorities on Gothic literary subjects, especially Dracula.

In 2017, its second recipient was the American cultural historian David J. Skal, whose immense body of work in the Gothic and horror genre had recently included Something in the Blood, The Untold Story of Bram Stoker, the Man Who Wrote Dracula, quite possibly the most comprehensive study ever of the life of Bram Stoker, and of his work.

The Society produces a quarterly magazine for its members, Voices from the Vaults.

To apply to join the Dracula Society online, if you have a debit card, credit card or a PayPal account, please fill in and submit

an online membership application form and pay the appropriate fee through PayPal. A PayPal account is not needed for card payments.

To apply to join us by post, you will need to print out and fill in a postal application form, and send it to us with the appropriate membership fee.

The cost of membership is £19 per calendar year for UK resident individuals, with a joint UK membership option of £34 for two UK members who are resident at the same UK postal address.

The cost of individual only non-UK membership is £25.

New members joining after September 1st will not need to renew until the end of the following year, and can therefore gain up to sixteen months membership in their first year.

Note that prospective members must be over the age of 18.

Read more detail about subscriptions and all the benefits of Society membership here.

Our annual membership fee only covers the maintenance of this site, the production and distribution of our magazine, and the costs of advertising our events to members. All Society events are self financing, and are not subsidised from the membership fee.