Past Society Events in 2022

Click here for information about future events planned for the rest of this year and beyond.

Click here to see a timeline of the major Society events since our foundation in 1973!

A day trip visit to Highgate Cemetery. The Society had previously visited here several times, but the last time was way back in 1987, now 35 years ago!

The weather was kind on the day, and the seventeen members and guests who attended had a great time. 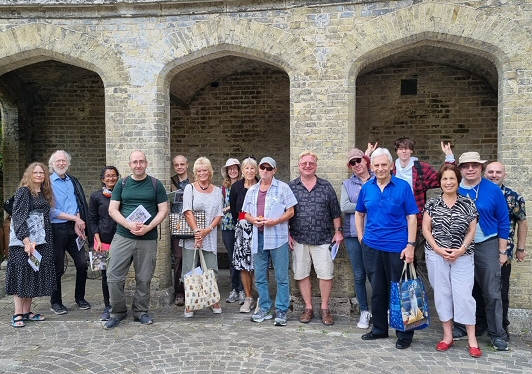 The Society group at the entrance to Highgate Cemetery

Although great doubt has been cast on the theory in recent years, the cemetery was long considered by some to have been intended by Bram Stoker to be the site of Lucy's tomb in Dracula.

This included Society co-founder Bernard Davies, who identified one particular tomb as a likely candidate, and took us to it on our early visits. 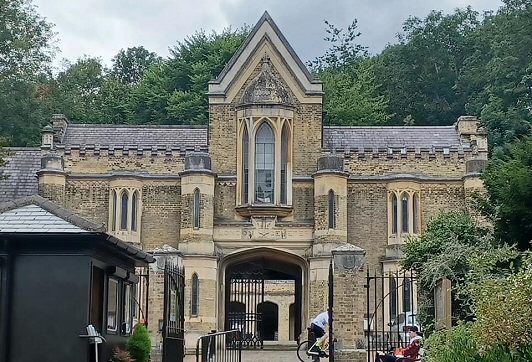 Other locations, such as Hendon churchyard, have tombs of the correct type which more fit the location of the tomb in the book, which was stated to be "in a churchyard", not "in a cemetery", but Highgate Cemetery is still a splendidly Gothic location! 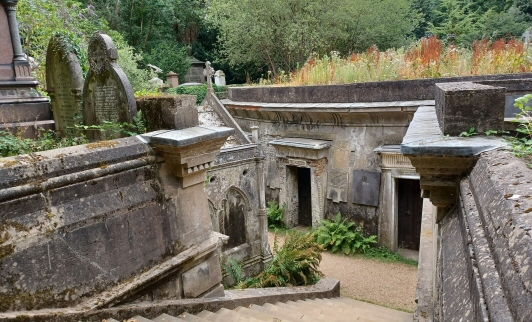 Part of the 'Circle of Lebanon' in Highgate West Cemetery

Writer and film historian Darrell Buxton gave us a fascinating illustrated talk about the history of the 'portmanteau' film, with particular reference of course to the horror anthologies produced by Amicus Productions during the 1960s and 1970s, a genre arguably starting in the UK with the Ealing Studios' 1945 classic Dead of Night. The genre goes back much further than that though, and includes early German silent productions.

After two consecutive meetings where we had lost our intended programmes, it was good to get back to normal service!

Again our scheduled speaker Jess Kidd was sadly unable to be with us on the night. Again we hope to welcome her on a future occasion.

We decided on this occasion to just have an informal 'Committee chat' meeting after the business of the Annual General Meeting was concluded. After the Membership Secretary's and Treasurer's reports, and the approval of the Society Committee's membership going forward, the members of the Committee took questions from the floor about the general direction of the Society, and also suggestions of trips that we might do in the future.

It was good that without the pressure of having to fit things around a formal talk, we could all chat and socialise together for longer than at a normal meeting.

Sadly our scheduled speaker Dr. Janette Leaf was unable to be with us on the night at very short notice due to COVID-19.

We hope to be able to welcome Janette on a future occasion.

Instead we held an impromptu meeting themed on FW Murnau's silent film classic Nosferatu, whose première had taken place 100 years ago on the previous day, March 4th 1922.

We screened footage from our 2011 Society visit to Orava Castle in Slovakia, which was one of the main exterior locations for the film, followed by a Nosferatu themed quiz, which was keenly fought by hastily assembled teams drawn from those present.

After the results were given we watched a piece produced as a DVD extra featuring our Honorary Life Member Christopher Fraying, which gave a comprehensive analysis of the film.

To mark the centenary year of the original 1922 silent classic film version of Nosferatu, which we screened in 2019 to tie in with our Germany trip to visit some of its locations, we screened for the very first time at a Society event the 1979 remake Nosferatu the Vampyre, directed by Werner Herzog and starring Klaus Kinski in the title role.

A few early Society members remembered the first time we saw this film, at a preview screening in the West End of London at the time of its release, arranged by our then member the late film critic Marge Bilbow! 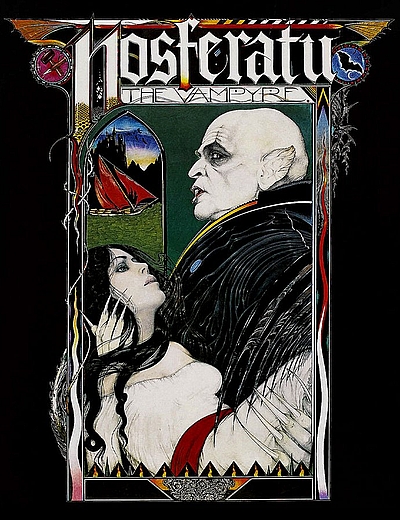 Striking cinematography, dramatic music, and an intense and almost tragic performance by Klaus Kinski, make this a haunting and beautiful addition to the screen versions of Dracula.

A good turnout of members present boded well for the rest of the year, which we hope will be when we finally get back to "business as usual" after the COVID-19 pandemic disruption to our normal programme of events.