THE FOLLOWING INFORMATION REFERS TO A PAST SOCIETY TRIP, AND IS PRESENTED FOR INTEREST ONLY,

The Dracula Society and A Ghostly Company are commemorating the 2014 bicentenary of the birth of Gothic horror writer Joseph Sheridan Le Fanu (28 August 1814 – 7 February 1873) by spending a long weekend in his birthplace, Dublin.

We will be visiting sites associated with Le Fanu’s life and work, in the company of our expert resident guide, Society member and Children of the Night Award winner Brian J. Showers. 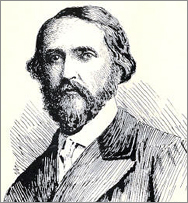 J. Sheridan Le Fanu, who is best remembered for his ghost and mystery fiction (Carmilla, Green Tea, Schalcken the Painter, Uncle Silas, The House by the Churchyard, etc.) was born, lived his whole life, and died in Dublin.

We will spend three days in his footsteps (as well as those of a certain Bram Stoker), with opportunities to visit many of Dublin’s attractions (the Castle, Writers' Museum, National Gallery and Museum, St. Michan’s Church, etc.)

Our evenings will include a Le Fanu ‘Birthday Dinner’.

“..... the only excursion I made was to Chapelizod to see the House by the Churchyard, which is quite unmistakable”.

We heartily disagree with Monty’s pronouncement on Dublin, this being the Dracula Society’s third trip to the Irish capital.

3.45pm: meet in the lobby of the National Gallery (Clare Street) for a private viewing of a Le Fanu portrait not normally on display.

Jim Rockhill is a Le Fanu scholar, noted for his excellent biographical and critical introductions to the definitive Ash-Tree Press, three volume edition of the collected supernatural tales.

The Dublin Literary Trail led by Brian J. Showers. Assembly at the Oscar Wilde statue in Merrion Square at 10.00am.

The precise route and locations will be determined on the day, but will include the following:

• St. Ann’s Church (where Stoker was married to Florence Balcombe on 4th December, 1878)

• [37] York Street  (demolished, but where Charles Maturin lived and died)

Disperse for lunch at suitable pubs; Brian will take people to ‘The Bleeding Horse’ - mentioned in Le Fanu’s first novel The Cock and the Anchor – for those who want to have lunch there….

In this classic tale, a country vicar is driven to madness and death by the surreal, but sinister appearance of a demonic monkey. But is the creature a real portent of doom or the side effect of the reverend's new beverage? Performed in the half-light, this eerie tale uses a combination of voice acting, hand-operated sound foley, and live music to recreate the world in the audience's imaginations, bringing out the story-telling power of the words and the human voice.

Wireless Mystery Theatre is Northern Ireland's only audio theatre company, specialising in live staged radio plays and broadcast material. They have toured the UK and the Republic of Ireland and their work has been broadcast on BBC Radios 3 & 4, as well as in Canada, Germany, and the United States.

Le Fanu connections – The House by the Churchyard, and Ghost Stories of Chapelizod.

Dublin highlights for free time include: